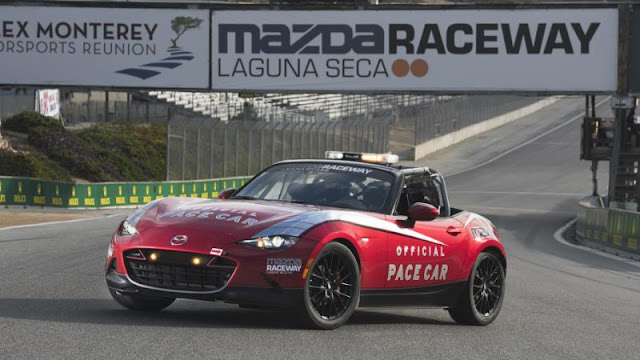 Mazda's motorsports department officially finished the first example of its new MX-5 Cup racer. But while the rest of the fleet will be used in the Global MX-5 Cup championship, this initial unit has been designated for another purpose. It's been dedicated to serve as the new pace car for Mazda Raceway Laguna Seca.
Based on the latest ND-generation MX-5, the Cup racer was previewed in racing spec this past November ahead of its debut at the SEMA show. Though we've still yet to see the final spec sheet, it clearly benefits from key upgrades to the rolling stock, not to mention the added roll cage, racing buckets, and more. The pace car also features emergency lighting and a livery designed by Mazda and applied by Sticky Fingers Design out of Huntington Beach, CA.
The beefed-up little roadster will join a cadre of pace cars used at the legendary Northern California circuit. Other pace cars in the fleet include a Mazda6, RX-8, CX-5, and the previous Miata. The season is winding to a close at Laguna Seca, with the Pirelli World Challenge finale and Mazda Road to Indy still set to take to the track next month.

MAZDA RACEWAY IS READY TO PACE THE FUTURE
MONTEREY, Calif. (August 13, 2015) – Mazda Motorsports used the annual car-fest known as the Rolex Monterey Motorsports Reunion to roll out the first production 2016 Mazda MX-5 Cup race car. This particular vehicle is guaranteed to lead races as it will be the newest pace car in the Mazda Raceway Laguna Seca fleet of Mazda safety vehicles.
The 2016 Mazda MX-5 Cup race car follows a 26-year history of the MX-5 Miata in motorsports. The first race cars to be sold to customers will be used in the 2016 Global MX-5 Cup, known in the U.S. as the Battery Tender Mazda MX-5 Cup. With the 2016 racing season still many months away, placing the first production race car into pace car duty allows Mazda to gather additional durability data while showcasing it in front of one of the most influential motorsports crowds of the year.
"For Mazda, this weekend is the perfect blend of past, present, and future," noted John Doonan, director of motorsports for Mazda North American Operations. "We are celebrating our motorsports heritage on the track with our vintage race cars. We are showcasing our current line-up of race-inspired products in our consumer display in the paddock, and with this pace car, we are giving a glimpse into the 2016 racing season when the latest MX-5 Miata will be racing in the Global MX-5 Cup."
The graphics design was completed at the Mazda Design studio in Irvine, California, and applied by StickyFingers Design.
The 2015 Mazda Raceway Laguna Seca racing season will conclude on September 11-13 with the Mazda Road to Indy, and Pirelli World Challenge finales.
Posted by SFDstudio at 9:57 AM